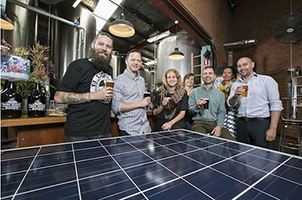 Local Sydney craft brewer Young Henry’s recently won $40k in funding for their community solar project.  This Newtown brewery will have a 30kW PV system on their roof with an open call for local investors bidding on 76 shares allocations of $250 each.

The 120 solar panel system aims to supply up to 25% of Young Henry’s electricity needs.  The project was aimed at “mums and dads who are struggling to find an opportunity to invest in renewables”.  The initiative, which appears to happen in the right place at the right time, is aiming to provide a six to eight percent return for its investors.

Communities around Australia are tapping into the benefits of community solar, which is especially appealing to apartment dwellers, home renters and anyone with an interest in solar without having the full up-front costs.

In Canberra, a larger scale operation has launched as the “ largest community-owned” solar farm in Australia.  Aptly named SolarShare, the project will mount upwards of 5000 solar panels on three hectares, which are leased from the Mount Majuyra Vineyard.

This project is projecting more than $360k in earning a year, which easily justifies the over 400 registered investors.  With even more investors being welcome, they will all share in the profits from selling the electricity back to energy retailers.

Recognising this as the “energy future”, SolarShare has applied for a “fixed-price feed-in tariff of 20¢ a kilowatt-hour generated for 20 years”.

Some the community solar farms are so small, they’re being called “Solar Gardens”. Partially borne out of frustration from lack of policy makers ability to launch and rollout programs and solutions for these communities, they’ve taken social license and actioned these themselves.

According to reports, there are over 70 community groups across our island home that are

The desire and the intention is there, but Australia’s road to 100% renewable will be longer and slower than many are hoping for.

Even with the recent report released by Sydney’s Institute of Sustainable Futures outlining how Australia could save over a billion dollars by transitioning to 100% renewable by 2030, it’s still not enough of a kick start to for the entire nation to embrace this inevitable energy shift.

There is no denying that there is a shift; culturally, socially, politically and economically that is occurring in the energy sector.

So, whether it’s buying energy from your neighbour or just buying a local, solar brewed beer we all need to do our part to help our communities and others across Australia to being energy neutral.