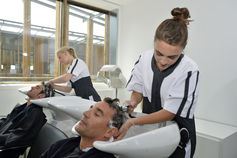 Blog Where are the female tradies?

Where are the female tradies?

Male domination of trades and trade courses in the automotive, construction, mining and energy sectors is entrenched above 95%, despite the substantial pay advantage compared to other trades such as hairdressing and hospitality.

In an effort to uncover why so few girls pursue the male-dominated trade careers, I set off to schools with my pink hard hat and voice recorder. At each school I visited I could count the number of female students doing a manual trade course on one hand.

Why are the trades male dominated?

The research interviews with secondary school students (mostly females) and educators revealed that the “blokey” image of the trades continues to put off girls: “They are for the boys who don’t do academic,” was a common message.

Just like students worldwide, those I interviewed said that most students are aiming for professional employment.

Male domination of the manual trades is persistent and resistant to change – unlike the professions and management where women are breaking through the glass ceiling.

Gender segregation of the trades is attributed to:

At the four schools I visited, manual trade courses, trade experience and “try a trade” days were on offer to all students. But a staff member explained that due to cultural influences:

… stereotypes are set by year 10 and mostly girls wouldn’t even consider a trade.

The higher rewards and female role models associated with professional employment have attracted women, and women are attaining high educational standards. Yet they are largely segregated in service professions in health and education.

The barriers to the manual trades have been crafted over many years and remain solid as a rock.

Why does this matter?

It matters to female students. They felt like they were missing out:

Why doesn’t Mr Y send us lots of emails about trades? We get lots of colourful stuff about uni.

I had no clue the wages were that different.

Young women who pursue a non-professional path risk a low-wage future in female-dominated trades like hairdressing. As soon as students walk out of the school gate into an apprenticeship, the males will start taking home about 20% more in their pay than their female peers.

It matters to industry. It is claimed higher female participation in the trades could reduce skills shortages and reduce business costs.

In 2014, the Minerals Council of Australia reported that national skills shortages unnecessarily raise costs and create a sub-optimal investment climate for the mining sector:

It is economically sound to expand the labour pool by tapping into under-represented groups such as female and indigenous workers.

This talk has to become action. Apprenticeships are declining in Australia, including the skills-shortage areas in the mining, energy and auto sectors. Industry has been drawing onskilled migrant workers through the 457 visa scheme.

What needs to be done?

Improved economic security through trades for girls is being tackled on two fronts: advocacy to improve wages in low-paid female-dominated trades and action to better inform girls about manual trades as a career option. A comprehensive range of recommendations on education and industry policy to encourage girls into male-dominated trades has just been launched by economic Security4Women.

The female students in my research said more girls would do the manual trades:

They wanted more women in trades as role models to visit their schools:

Maybe if there were more workers coming to schools talking about what it’s like in industry […] we would wake up to ourselves.

They wanted media images of women in trades that they could relate to. Not like:

… in the movies you see a male plumber, fat, with their [sic] bum crack showing.

Not all, but some staff were aware that unless girls pursue maths to a high level in senior school, they can almost say goodbye to male-dominated careers like engineering and manual trades.

Staff wanted to do more to encourage girls. They expressed concern at the lack of time and resources in schools for career support and for building industry links.

It is reported that more boys are being inspired by celebrity chef role models to trade the electric drills for the food processors in hospitality. Perhaps these role models are the key to breaking down entrenched gender stereotypes for women in trades too.