The Warburton review of the Renewable Energy Target (RET), released just over a week ago, has called for the removal or winding back of solar subsidies. If the government goes ahead with the plan, it will increase the price for households and businesses looking to install solar by roughly one-third.

For a solar system of around 20 panels (5 kW) that means you could miss out on a subsidy for your solar array worth up to $5,000.

How could this happen? Earlier in the year the Abbott Coalition government ordered a review of the Renewable Energy target – called the RET. It is a policy that sets a target for Australia of reaching 20% renewables, like solar and wind power, by 2020. The Warburton review was the result and it has argued that the RET should be scaled back or scrapped.

So for a small solar system of around 1.5kWh the subsidy is $1125, 2kW is $1500 and 3kW around $2250. An average-sized house will generally install something between 3kW and 4kW – depending on electricity usage and roof design. So that’s why if government support for solar, in the form of the RET, gets scrapped or fundamentally changed, the $3,000 which you’re currently eligible for will disappear overnight. 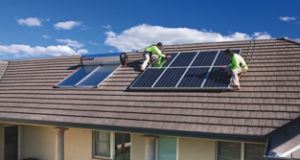 There’s another dynamic also at play here. Because STCs are traded on a market, even threats to change or scrap the RET can result in a change of the price of STCs. Ric Brazzale, President of RECs Agents Association (RAA) and CEO of Green Energy Trading, observes that STC value has probably fallen by around $0.35/STC, on a price of around $37/STC – so not a major change. He says that it’s difficult to see how that would change in the middle term because there are so many factors in play.

For small and medium-sized businesses looking to install PV, the outlook for solar subsidies is even bleaker. The Warburton review has recommended that systems larger that 10 kW should no longer generate STCs. At present, systems up to 100 kW do so. That would dramatically change the ability for a business to reduce its power bills by installing rooftop solar.

“The 10kW limit as proposed by Warburton would kill the commercial market- being on top of changes to electricity charging (more fixed or demand based so making it harder to avoid),” says Brazzale. He is referring here to a trend right around the country that utilities and electricity retailers are placing extra conditions or charges on businesses looking to go solar, both to ensure that solar doesn’t adversely affect the grid, and also simply to make it harder for them to go solar.

On the back of all of this, solar installers and developers have reported a big surge in interest for rooftop arrays with many people hurrying to ensure they don’t miss out on the subsidy. Generally the deposit on a system is 10% of a system cost. So if you’re interested in solar it may pay to move quickly to lock in a quote for a solar system sooner rather than later.