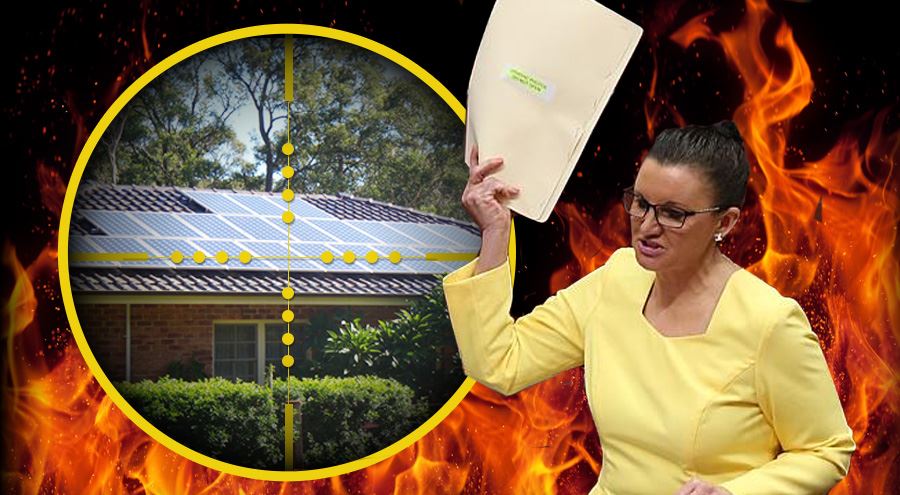 Blog Lambie’s PUP Defection has Solar Back in Crosshairs

Lambie’s PUP Defection has Solar Back in Crosshairs

The mixed bag of Senators delivered up at last year’s Federal Election was always going to make things interesting. And now with Tasmania’s Jacqui Lambie walking away from the Palmer United Party (PUP) it looks likely that the Renewable Energy Target (RET), and with it solar subsidies, are back in the crosshairs.

PUP and its three Senators were the unlikely saviours of the RET, when Clive Palmer fronted one of the more unusual press conferences seen in Canberra to announce his support for the RET, in August. The RET underpins the subsidies paid to renewable energy in Australia, including rooftop solar.

But now that deal looks to be in tatters, with former PUP Senator Jacqui Lambie walking away from her party and the Government courting her vote to make major changes to the RET. In an interview on the ABC’s 7:30 last night, Lambie revealed that almost immediately after leaving PUP, she has been in talks with Environment Minister Greg Hunt about supporting the Government’s changes for the RET.

“We just went over some of the RET that’s expected to come up… in the future. Just touched on that lightly, and hopefully those talks remain open and we’ll see where we go from here on in,” said Lambie. One key negotiating point between her and the Government is that she would like to see proposed changes to Australian defence personnel payments and leave entitlements reversed. In the 7:30 interview, Lambie indicated that she would be willing to support changes to RET in exchange for the defence payments.

“I guess with what they want in their plan for the RET, I guess if they want my voting in that area, then they’re going to be saving on the RET anyway in the long run,” said Lambie. “$121 million for what I’m asking for our defence personnel is like a walk in the park. So I think that some negotiations will need to be done on this.”

Lambie’s vote alone won’t be enough to secure changes to the RET, however the Guardian revealed yesterday that Liberal Democratic Senator David Leyonhjelm is currently “counting the crossbench” numbers that would see the RET changes pass the Senate.

“I am working on an alternative crossbench proposal,” Leyonhjelm told the Guardian. “It is nowhere near final but it would solve some of the problems we are facing.” On the anti-RET front, Leyonhjelm has Family First senator Bod Day and independent senator John Madigan on his side.

So what could it mean for solar? A substantial reduction in the RET would provide the trigger by which the small scale renewable energy scheme, that provides subsidies for rooftop solar, can be slashed or a cap placed on how many solar installations can be supported. Given Leyonhjelm’s well-known advocacy of libertarian principles, it would be no surprise if he advocated strongly against support for solar – which is sometimes characterised in certain political circles as “middle class welfare.”

Somewhat ironically, by supporting legislation that reduces the RET, Lambie will actually be voting against the financial interests of Tasmania. Business Spectator analysis, published yesterday, shows that the government owned Hydro Tasmania has been a major beneficiary under the RET, returning over $100 million to Tasmanian taxpayers after reaping record profits in 2013.

“Hydro Tasmania has been a bigger beneficiary from the RET than any other company bar none, creating around ten million renewable energy certificates from its hydro generators, on top of several more million from its wind farms,” wrote Tristen Edis. “The RET is a net money spinner for the Tasmanian economy with the state creating vastly more money from the scheme than its power consumers pay.”

So if Lambie backs the government in a reduction of the RET, Tasmanians’ lose, wind power loses and solar loses. Investments in coal win, and that’s exactly what Clive Palmer is investing in in Queensland’s Galilee Basin. Politics is indeed a funny game.

PrevRET Review: Average solar system price could jump by $5,000
Why Affordable Battery Storage is Closer than you ThinkNext