In 2006 Sony Pictures Classics released a documentary film called Who Killed the Electric Car? The film suggested that since the average driving distance of Americans in a day is 30 miles or less and so for 90% of Americans, electric cars would work as a daily commute car or second car.

This was deduced by the fact that General Motors first electric vehicle [EV] release, the EV1, was equipped with a lead acid battery that had a range of 60 miles/96.57Km.

Twenty years later, not only is the electric car not dead – it’s been resurrected with a vengeance. Tesla’s Model S boasts a battery range of 315 miles/506.9Km and the 2017 Chevrolet release, the Bolt EV, is promoting a range of 238 miles/383Km per charge.

Referred to as the “iPhone of the car world” and released in 2014, the BMW i3 can travel up to 276 miles/444Km. That distance is improved on the premium EV’s base of 195 miles/313.8Km with the addition of an optional range extender. It’s mated to a petrol engine, which is used to create additional power for the battery and not to drive the car.

If you’re ready to trade-in your current gas guzzler for something more eco-friendly, you’ll need to have a decent amount of cash on hand.

The Chevrolet Bolt is set to launch at just under AU$39,357.47* This car is actually an Australian designed vehicle and is being solicited as the “most advanced model in the General Motors stable. Unfortunately for us, it is unlikely to become available in Australia.

That’s just about AU$6,559.89 less than what the BMWi3 retails for. If you’re still in the spending mood, bust out your black American Express card to purchase Telsa’s Model S for a meager AU$100,00.

The dozen or so EVs available in Australia average around $AU$44,707, with the Chevrolet Spark being the most affordable at $AU27,000.

That’s a fairly average price to pay, especially when you consider the annual savings from not purchasing petrol every week or two.

From our calculations, based on the Nissan Leaf, there is an annual saving on fuel costs of close to $400. You can cost up your own personal situation using the calculator in the myelectriccar.com.au site.

Another way to improve your saving is by using one of the free charging stations located all over Australia, including Tasmania. 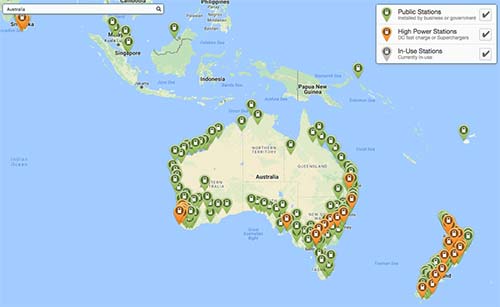 With the advent of battery storage unit, your home or business’ solar system could power up your EV for no cost to your electricity provider [along with powering most of your other appliances, lights and electrical needs].

Yes, it’s a lot of information to process and it’s more than just buying a “new car”.

It’s a change and a shift in the way that you live, how you think and how you’ll view the world around you.

*Conversation to Australian dollar based on 1 USD = 1.320 AUS