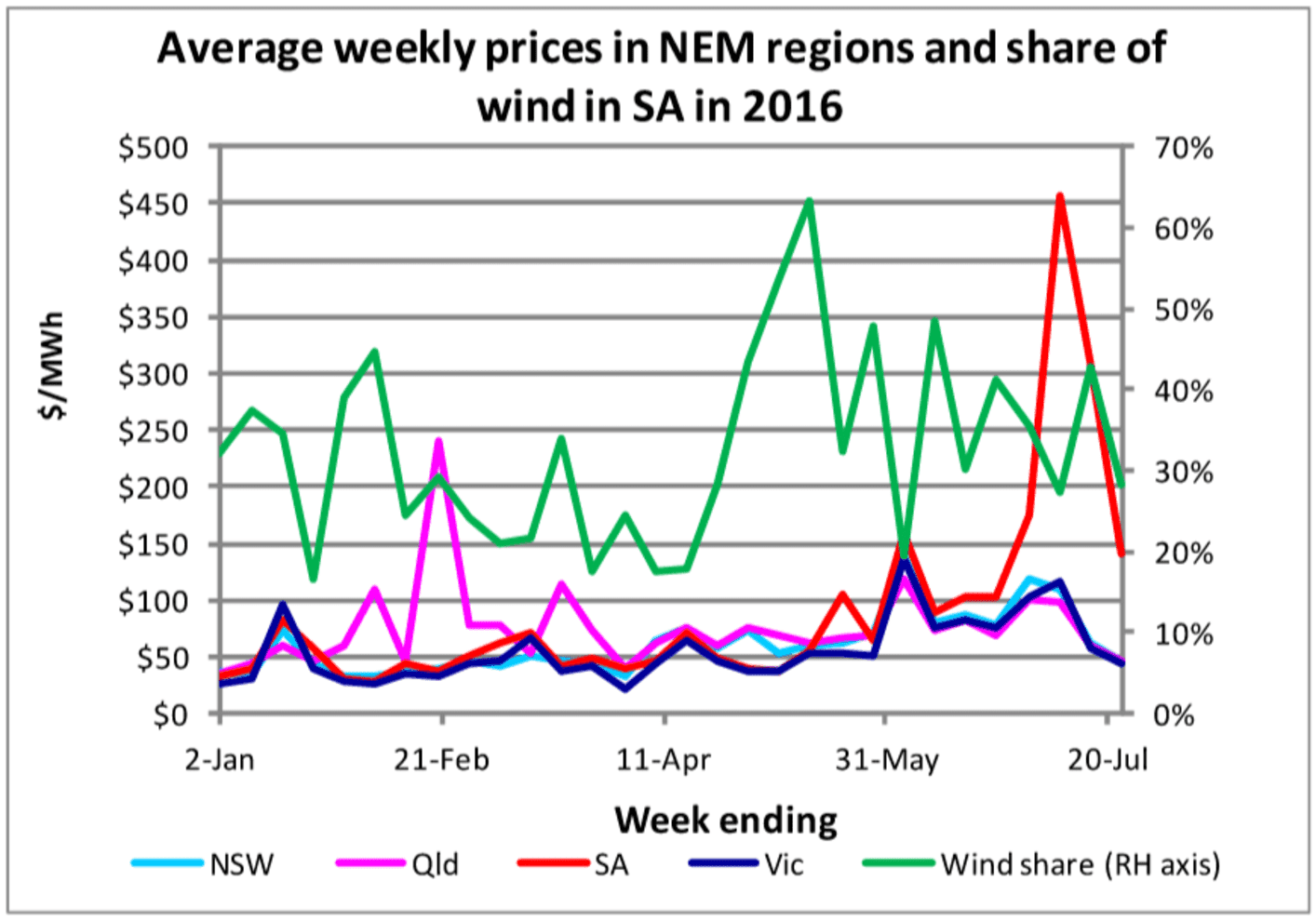 The past few weeks have seen extraordinarily high wholesale electricity prices in South Australia, averaging (as of 23 July) A$321 per megawatt hour, compared with A$80 per MWh for July 2015.

The prices have attracted an even more extraordinary deluge of news coverage – much of it asserting, with little or no evidence, that the high prices have been caused by an excessive reliance on wind generation.

This graph shows the wholesale prices in the National Electricity Market (NEM) since the beginning of July.

Looking at the graph, several things are apparent: 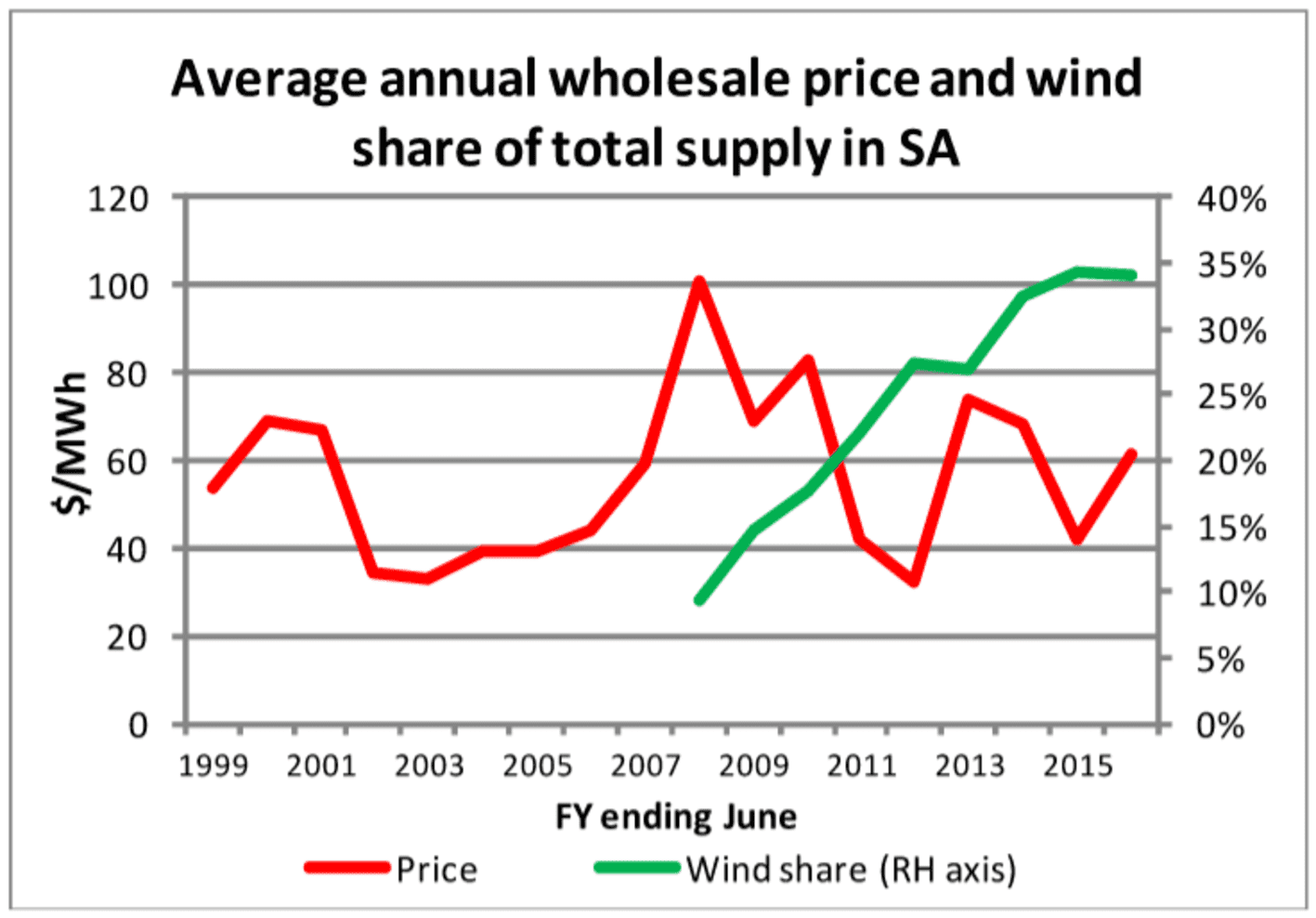 What does dictate electricity prices?

In the NEM, just as in any complex market, prices are determined by a combination of many different factors. The factors that may have affected SA’s prices this month include:

Let’s briefly consider each in turn.

Winter heating requirements mean than July in SA is almost always one of the top two months for overall electricity demand (though not for peak monthly demand, which happens during summer heatwaves). However, average daily demand so far this month is slightly lower than the same time last year, while average wholesale prices are nearly four times higher. So something else must be pushing up the price. 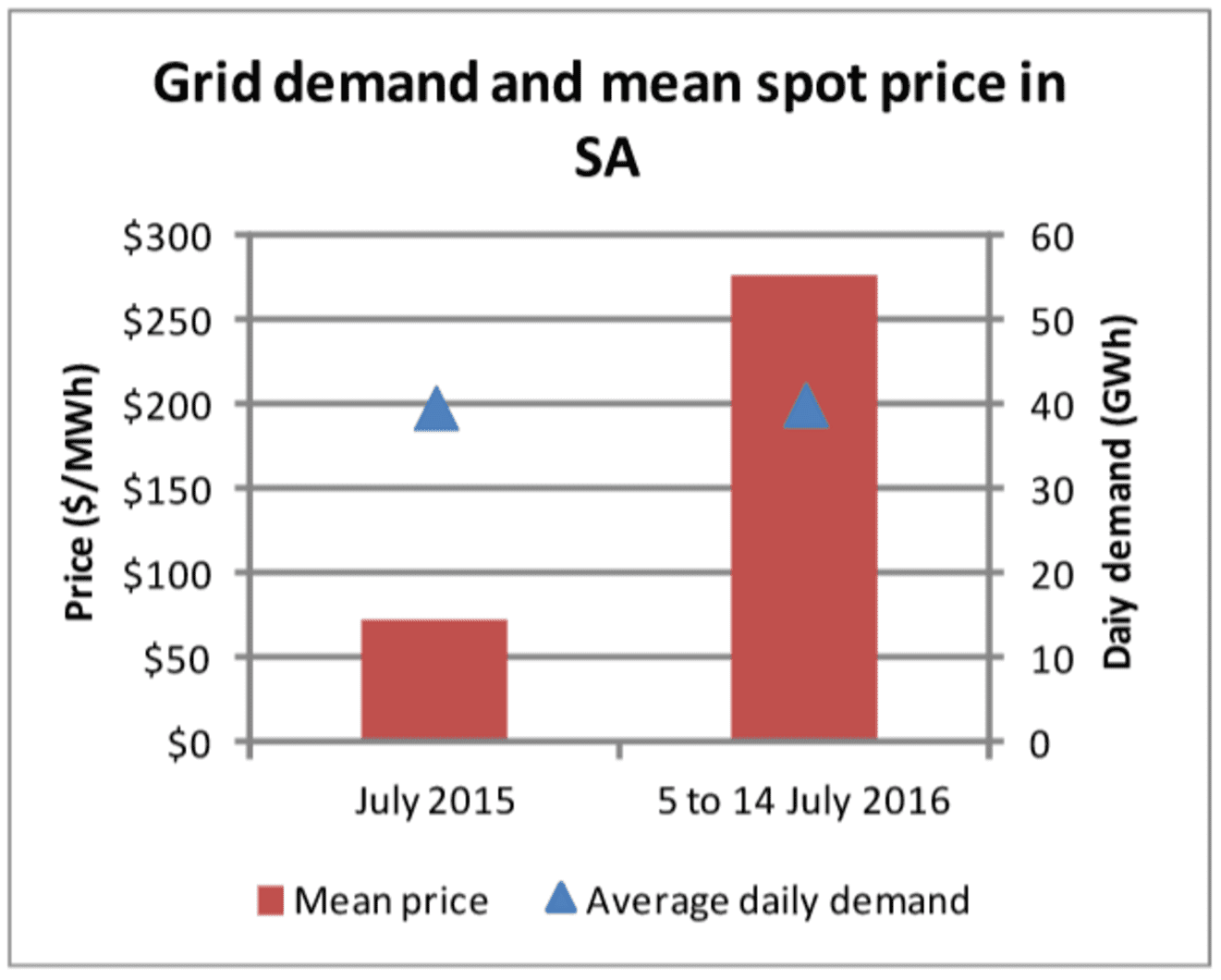 July is normally a windy month in SA. But it seems likely that this month’s total wind generation, while roughly the same as last July, will be much lower than in July 2014. The average price so far this month is about A$320, compared with about A$70 in May this year (when it was windier) and A$50 in July 2014.

Wholesale gas prices increased rapidly during May and June. It is generally agreed that this is due to increased demand for gas for the three export LNG plants in Queensland, which are now running at two thirds of full capacity.

Gas prices affect wholesale electricity prices mainly though their effect on the operating cost of open-cycle gas turbine (OCGT) generators. These smaller, fast-start generators are ideal for meeting demand spikes, but they are relatively expensive to run. As we have already seen, wholesale prices climbed in all NEM states during May and June, and there is little doubt that higher gas prices were the main driver.

For most of its 18-year existence, the NEM has had a large excess of generation capacity relative to demand. This ensured tough competition between rival generators, which drove prices down. But now, in SA, this competition is weakening.

Early last year, Adelaide’s 478-megawatt gas-fired Pelican Point power station was taken offline, despite being one of the most efficient and lowest-emission thermal power stations in Australia. Its owner, Engie, said it was unable to trade profitably based on expected prices of gas and electricity. (In mid-July it was brought partially back online at the state government’s request, and has been operating at about one-third capacity for much of the time since then.) Then in May this year, the ageing 530MW coal-fired Northern power station was permanently shut down.

SA’s remaining thermal generating capacity consists of modern and old gas-fired plants, including several of the OCGT plants described above. Combined, their total is less than the annual summer and winter maximum demand in the state. So if periods of high demand coincide with periods of low wind generation, owners of these power stations can charge more because these days there is less competition.

The Heywood interconnector, the main grid connection between SA and Victoria, has a maximum capacity of 460MW and at times of low wind generation it effectively functions as a direct replacement for Northern, by supplying electricity from the Latrobe Valley. It is being upgraded to 650MW and, as part of this work, it was effectively taken offline for about a week, beginning on July 5 – the period that has seen the highest prices.

Compare the period July 5-14, 2016, with July last year when demand was almost identical. The reductions in coal and interconnector supply are plainly evident, as are the increases in expensive gas generation from Torrens Island (Austrlia’s oldest operating thermal power station) and the OCGT plants. 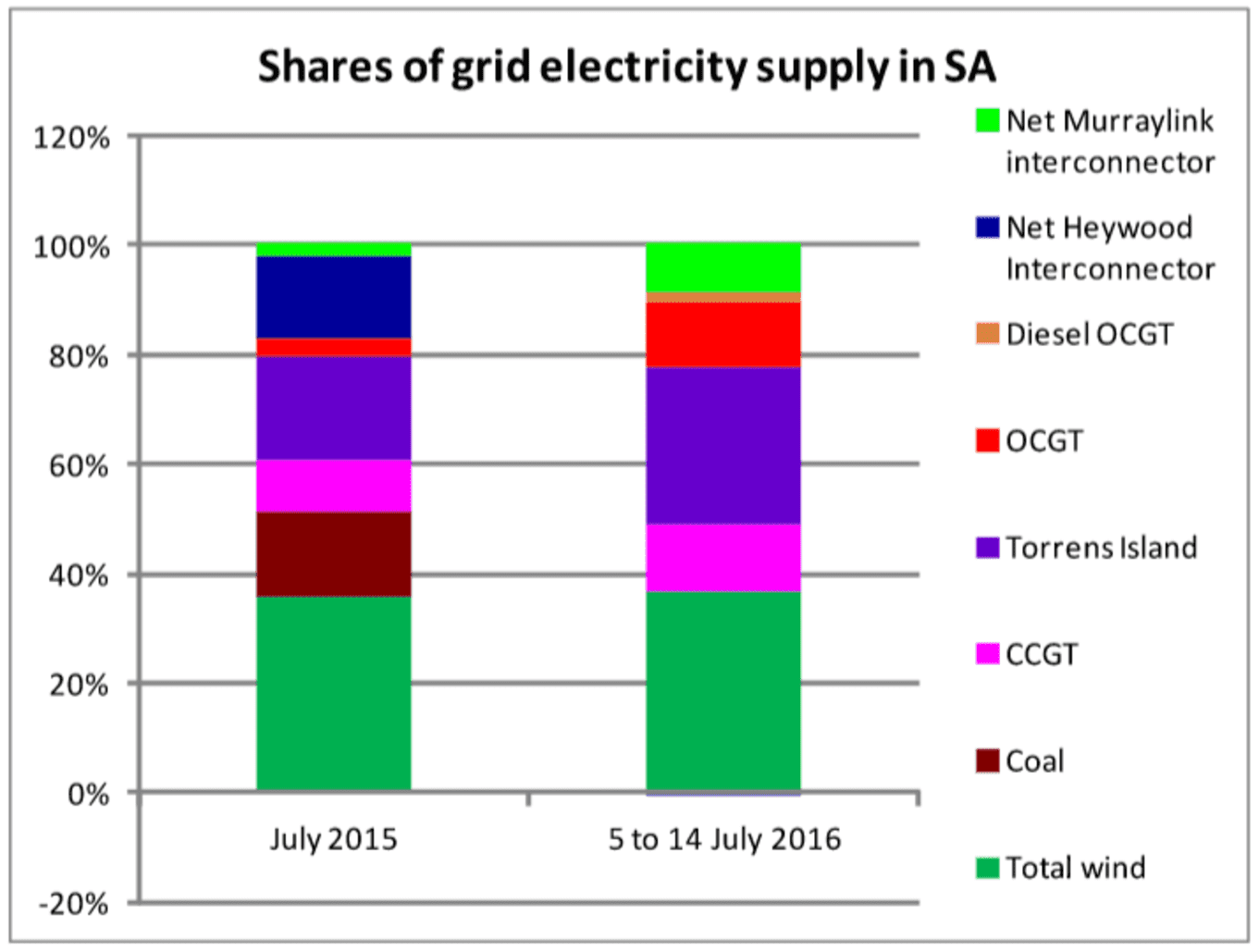 Periods of low wind have thus left SA depending on a mixture of gas generators, many of them old and inefficient, whose already high costs have been driven still higher by the rapid rise in gas prices.

This has given the three businesses that own these power stations – AGL, Engie and Origin – increased market power. The rapid price spikes during the period July 5-15, and for several days thereafter, suggest that this market power was being exercised.

So what’s the real cause?

As we have seen, if you want a satisfactory explanation, you have to start with the very high wholesale gas prices right across the country. These have made SA’s gas-fired electricity options much more expensive, in turn raising the floor price for all of its power in times of low wind generation.

In addition to this higher floor price, the tightening of supply and lack of competition have allowed generators to drive prices to even higher levels in the form of short-lived spikes, which have raised the monthly average price still further.

The closure of Northern power station has significantly reduced competition in the SA wholesale electricity market. Additional competition, which normally comes from the transmission links with Victoria, was almost absent for an extended period during the month, because of upgrading work on the Heywood interconnector.

Competition from wind generators protects consumers from high wholesale prices for much of the time. But when the wind is not blowing, consumers are exposed to the full effects of an uncompetitive market. That is what has happened to customers in SA this month.

It is absurd to say that SA electricity prices would be lower if there were less wind generation. On the contrary, consumers would be exposed to high prices in an uncompetitive market for more of the time, and thus face higher average prices, not lower ones.

What has happened to SA electricity prices during this month is a stark demonstration of the need for a fundamental rethink of the the design of the National Electricity Market, which was designed at a time when Australia had very little gas generation and no wind. Demands to limit the growth of wind (and also solar) generation are in effect demands to renege on national emissions reduction commitments, for the sake of preserving a set of outdated and dysfunctional institutions.